Nick’s on the Beach 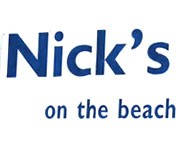 Nickâ€™s on the Beach is a seafood tradition. The Nick family patriarch began serving seafood Destin FL back in 1963, and now, his son runs the show. While the restaurant may have moved from father to son, the fresh seafood is the same. Nickâ€™s on the Beach is still known for its ray oysters, bacon wrapped shrimp, and homemade carrot cake. Itâ€™s also known for the fat Hattie Special, which is a sampling of fish, shrimp and scallops.